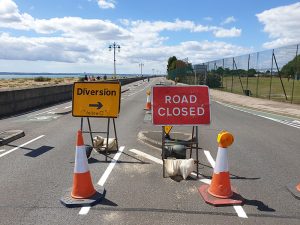 We have been awarded £214,515 in funding from the governments Emergency Active Travel Fund to put a variety of new temporary schemes in place to encourage people to walk and cycle more and to create space for social distancing.

These schemes are monitored to ensure they are working appropriately for residents, businesses and those using them. To make decisions, on whether the scheme needs altering, it should be removed or continue, data is analysed. This includes an analysis of the schemes usage, road safety audits, the latest information from public health and the police.

One of these schemes is the creation of space along the seafront for people choosing to walk and cycle. Through closing two section of road to vehicles we aim to provide a safe space where people can enjoy the seafront whilst social distancing.

What is happening and why?

The seafront roads are closed in two areas of the seafront to create a safe space for cycling and walking during the pandemic. This is part of our emergency travel response to the pandemic as requested and funded by government.

The roads are closed to vehicles 24/7 between the entrance to the Canoe Lake Car Park and St George’s Road and, between Clarence Esplanade between the junction of Serpentine Road and Pier Road.

At the start of this scheme the roads were closed at weekends in April and this approach has been reviewed and changes have been made to reflect the changes in government advice and changing demands in this area.

The roads are closed under a Temporary Traffic Regulation Order (TTRO). The TTRO can last until December 2021 and a review process is in place. Further information on providing feedback can be found in the ‘Have Your Say’ section.

The promenade along the seafront continues to be for pedestrians only. It is illegal to use privately owned e-scooters on public roads and footpaths throughout the UK and more information can be found her on the potential e-sco0ter rental scheme in Portsmouth.

How will people be affected by the change?

There is additional space for people to enjoy walking and cycling along the seafront.

Two vehicle diversion routes are in place along Eastern parade and Clarence Parade. The diversions routes have been appropriately assessed to ensure their construction is suitable for the increase in traffic. Eastern Parade or the A288 is a primary route in the city and suitable for all vehicles.

On street pay and display parking has been removed in the closure areas however, all seafront car parks are open.

The initial closure was in place from April and since then there have been small adjustments. This will be reviewed at the end of August to make a decision about whether to continue the closures in September.

We welcome feedback from businesses, customers, residents, and people walking and cycling through the area on how the scheme is working. This will help us make alterations and improve the scheme where possible, as well as helping us gather information to inform our review of the scheme. Please share your views by emailing us at EATF@portsmouthcc.gov.uk.

Please also share your views by taking part in the Sustrans Space to Move survey by visiting https://www.sustrans.org.uk/space-to-move/.

We will regularly review all temporary road changes to ensure they are working how we want them to during the pandemic. Data will be gathered on the route usage, road safety audit and current information from Public Health and the Police, and we will also review all feedback we receive. The reviews could lead to some alterations or removal of the road closure depending on how well the change works.

If the routes work well in creating a safe and enjoyable space that encourages active travel, we could then look at adapting the designs to make it permanent.  However, this is a temporary change at this stage, and we’ll be reviewing it regularly to make sure it works appropriately for users of the route, residents and businesses in the area.