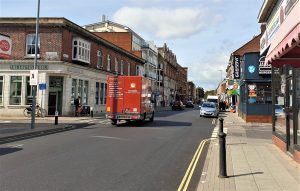 We have been awarded £214,515 in funding from the government’s Emergency Active Travel Fund to create temporary schemes to enable social distancing while walking and cycling. These schemes are monitored to ensure they work well for residents, businesses and users.
Feedback from all users of the route through Elm Grove and Kings Road, including local residents and businesses has led to the decision not to extend the three-week trial of the segregated cycle lanes, with a commitment to reconsider how to deliver alternative improvements along this route, which has a history of traffic incidents and is seen as particularly hazardous to cyclists.

The Covid Response Board reviewed the analysis of the cycle lanes and a unanimous decision was made to stop the trial at the end of the three weeks, on 26 November. The hope had been that local businesses would benefit from a less car centred area that encouraged more cycling to the area however discussions with local businesses and the survey responses showed a loss of customers above that expected amount during a lockdown.

The survey feedback clearly demonstrated to the board the need to stop this scheme along with the feedback received from discussing the trial with businesses and emails. The survey showed that 67% of the over 1,400 respondents felt the trial was having a negative impact. The largest proportion of respondents reporting a negative impact are businesses (86%), then residents (72%), and finally visitors are classified as people that travel to/through the area from other areas of Portsmouth or from outside the city (64%). The council also received over 100 emails during the trial of which the majority were negative. The feedback has clearly highlighted a number of areas where lessons can be learnt for creating future segregated cycle lanes in other areas of the city. For more information view the summary of the feedback from the trial cycle lanes survey.

The council will continue to work with cyclists, local businesses, local residents and other interested parties on what lessons can be learned from the trial and how improvements can be co-produced in the future. During this time work has also started with businesses to help them develop a trading association like ones that are found in other areas of the city.

The details of the petition that was shared with the council and formally responded to is available on the petition webpages.

Elm Grove and Kings Road is a key route in the city and the council has hoped to make improvements for cyclists for some time as part of its strategy to encourage more walking and cycling in the city. The opportunity to introduce the cycle lanes came up as part of the government’s emergency active travel fund which can be used to make improvements to help people travel in different ways during the pandemic.

The cycle lanes will be separated from other traffic by plastic bollards attached to the road surface, providing extra protection for cyclists. Current bus stops, loading bays and disabled parking on the route will stay in place and new loading areas for businesses will be created along with additional cycle parking.

Throughout the trial, businesses, residents, customers, and people travelling through Elm Grove and Kings Road are encouraged to share their feedback during the three week trial. From this feedback a decision will be made on whether the scheme should be extended or removed.

The temporary cycle lane proposal was for a 6 week scheme. This survey was shared extensively via engagement sessions, social media posts and fliers that were delivered to 3,000 properties in the area.

Over 900 people shared their views in our recent survey following extensive engagement activity. 32 of these were local businesses of which 72 per cent did not support the scheme. Over 600 people that travel along the route responded with 66 per cent in favour. Local residents’ views were fairly evenly split for and against the plans.

Other feedback that came from the community were requests for a taxi rank in the area, improvements to Belmont Path and more trees, plants and cycle parking.

For more information view the summary of the feedback from the proposal survey.

We use cookies on our website to give you the most relevant experience by remembering your preferences and repeat visits. By clicking “Accept All”, you consent to the use of ALL the cookies. However, you may visit "Cookie Settings" to provide a controlled consent.
Cookie SettingsAccept All
Manage consent

This website uses cookies to improve your experience while you navigate through the website. Out of these, the cookies that are categorized as necessary are stored on your browser as they are essential for the working of basic functionalities of the website. We also use third-party cookies that help us analyze and understand how you use this website. These cookies will be stored in your browser only with your consent. You also have the option to opt-out of these cookies. But opting out of some of these cookies may affect your browsing experience.
Necessary Always Enabled
Necessary cookies are absolutely essential for the website to function properly. These cookies ensure basic functionalities and security features of the website, anonymously.
Analytics
Analytical cookies are used to understand how visitors interact with the website. These cookies help provide information on metrics the number of visitors, bounce rate, traffic source, etc.
SAVE & ACCEPT
Powered by